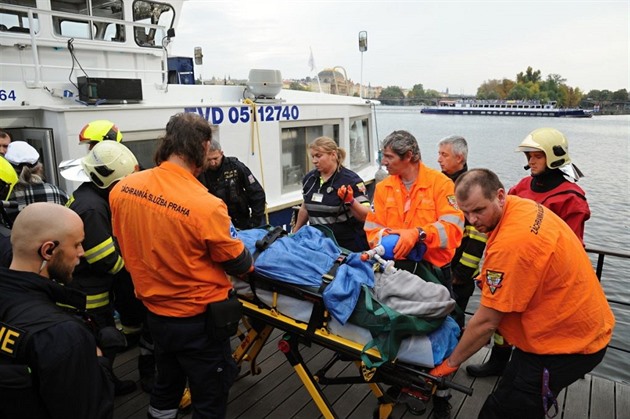 25. září 2016  15:12
Jan Tříska (†80) has succumbed to injuries from a fall from the Charles Bridge. Even with his life functions being stable after being taken to the Military University Hospital in Prague, his injuries were too severe and he died at two o’clock a.m. The legendary actor did not only leave his wife Karla Chadimova and two daughters behind, but also countless immortal roles.

He belonged to the most ingenious Czech actors and practically every director hoped to once have him in his film. His talent was doubtless from the very beginning – during his studies at DAMU. He became the youngest actor of The National Theatre in Prague ensemble in 1959; he did already join this theater as a student.

Tříska did not take roles only in the theater, but he was frequently given roles in films and series as well. Being strictly anti-communist he actually played in 30 cases of major Zeman, where Jiří Sequens pushed him to play so that the communist would be nicer to him.

„I was grateful for any kind of job. I have, however, never seen that series and I never wish to do so,“ the actor said in 2014. Shockingly, the actor was listed in the StB register as agent with a cover name „Toman“. No matter how hard the StB tried to make him cooperate as a close friend of Václav Havel, he never really worked as an agent.

His acting career finished in 1977. That’s when he signed the Antichart and fled to Canada. Later on he established himself in the United States. And he was not being lazy there.

„It was such a great luck that I’d got a main role back in Canada, in a small film called Bush Pilot. Then with an even greater luck, I got a main role in New York in a theater play Master and Margarita (from Michail Bulgakov, edt.). The play was a huge success thanks to the director and, modestly said, maybe even a little bit because of me,“ the actor said in one of his last interviews for E15, where he also admitted that there were big breaks between the job offers.

Whereas Tříska never gave up acting, his wife, Karla Chadimová, went into the business of being a hostess and slowly worked her way up to being a prestigious manager of Bel Air hotel in Hollywood.

Tříska was diligent even in the overseas. He played a role of a shooter in Miloš Forman’s The People vs. Larry Flint, he appeared in Highlander, but also in pieces like Ronin, Karate Kid 3 and many others.

He had his great comeback after the Velvet revolution, when Jan Svěrák casted him into his Oscar nominee film The Elementary School, where he played a strict teacher Igor Hnízdo. He came back to Prague for filming and theater plays regularly, but he and his wife never moved back to the Czech Republic. His main role in the King Lear version on Summer Shakespearean festival was awarded the Alfred Radok award. This March he was awarded a Kristian award for all-life input into world cinematography at the Febiofest

Monday should have marked the beginning of shooting of his new film called “On the roof” with the director Jiří Mádl. The shooting has been stopped due to this tragic event.

Jan Tříska was considered a great professional and sportsman, who always started his day with a morning run for the past 40 years. He put on his running shoes even five days after his car accident, which he had in 2015 and which required a month long physiotherapy. His greatest regret back then was missing out on a theater play at Na Jezerce Theater, which he was practicing for.