Katy Perry goes from tasteless to controversial. Transformation of the year! 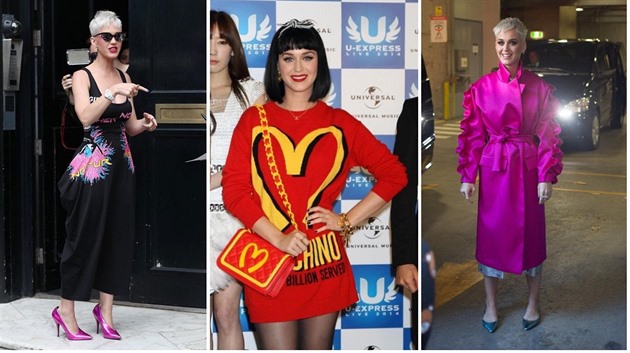 30. září 2016  9:02
Singer Katy Perry (32) has always belonged to those celebs, who stick out through their fashion style more than through their actual singing talent. Not a long has passed since the time she’s been hanging around the VIP parties in the most unbelievable creations and style combinations. Her favorite stuff would be kitschy and infantile accessories and colorful wigs. However, 2017 marks the end of that all. Katy has shortened her hair a lot and she wears them now in a twitching style, but she has sorted her wardrobe out and finally: the girl’s go style!

Being 32 Katy Perry is still not very mature. In a contradiction to her age, she would wear colorful wigs and crazy looking outfits not more than two years ago.

We may expect this pop star’s hairdos experiments not to be over yet, though. She’s gone from black shoulder length to platinum boyish style, but at least she’s thrown away her infantile accessories and started to dress up more appropriately to her age.

You would now see her mostly with her calves uncovered, which means a dress or a skirt. That would probably be because her thighs are a little plump and she’s trying to hide these under her skirts instead of attracting too much attention to them in tight trousers. She also often wears longer jackets, or coats and trench coats.

But at last she’s started to think about her accessories – maybe these don’t really nee dot be the craziest thing she’s wearing after all. Now, her accessories nicely match the rest of her outfits and make her look pretty perfect.

We think this is the reason why Perry often wears things with pink in them, so that she could make her shoes or glasses match them. We can also very often see her in trendy red color and not to mention her classical black outfits.

Her combos come out as fresh and elegant in the same time. Katy tries to mix more styles together which makes the eventual outfit.